Last week a customer came in with his driver’s seat not working. We checked the problem and found a seat motor not working. Upon further inspection we found water damage from the Harvey flood. This car had less than one inch of water on the rear seat floor board. The large amount of moisture in the air damaged the electric motor. So one gallon or so of water did thousands of dollars in damage one year later! As we were taking the seat apart I noticed how much stuff you are sitting on.  Four electric motors, air bag on the left side, seat heater, seat cooler, wires from top to bottom, seat switch to move the seat where you want it, a computer to operate the comfort system and remember what settings you like. To think when I started all you had a lever that moved the seat forward and backward. 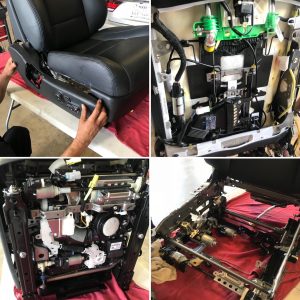