There has been much ado about automotive tariffs and a potential trade war in the sector. The threatened increase in the US tariff to 25% would have devastating effects on the automotive sector, both here and abroad, and undoubtedly lead to retaliatory tariffs overseas. Hopefully this is a positioning and negotiating strategy, not a goal of the administration. The recently announced cease-fire with Europe with the aim to get all automotive tariffs to 0% in both directions is certainly encouraging.

Interestingly, I don’t see any winners from a trade war. “Domestic” automakers are thoroughly global company’s now, making tons of cars and sourcing parts internationally. And alternatively, almost all of the “foreign” manufacturers build lots of cars here and employ thousands of US workers. For instance BMW exports about 70% of the vehicles they produce in the US and helped lower the trade deficit in 2017 by more than $1 Billion. There will certainly be some makers who are hurt worse than others, but it’s shades of gray.

So how legitimate are our cries of unfair automotive trade tariffs? Well if you look at cars, we have every right to complain. Until just recently, China’s import tariff was ten-fold ours, and Europe wasn’t much better. But it’s a different situation when it comes to trucks and SUVs. Back in 1963 Europe imposed an import tariff on US chickens. We struck back with a 25% import tariff on trucks and SUVs. The so-called Chicken Tax has virtually eliminated truck and SUV imports ever since (with the exception of Canada and Mexico, which are exempt under NAFTA). That is why all of the foreign manufacturers plants in the Southeast part of the country make SUVs, not cars. 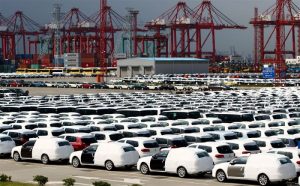